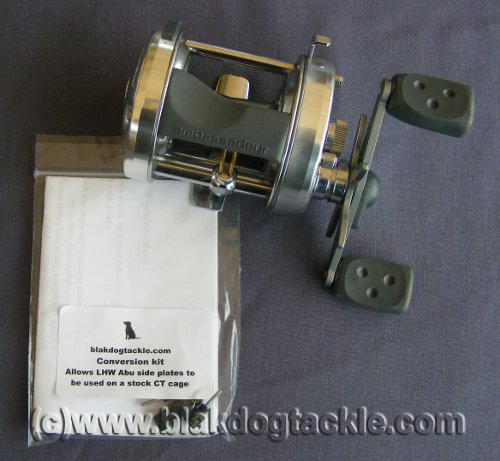 1. Up until now left-handed casters have been unable to use the factory converted CT frames that right-handed users have enjoyed since they were first introduced for the small Ambassadeur models by ABU in the 1970s. That has all changed with the release of our new Left Hand Wind Crossover Conversion Kit which allows left-handed reels to be fitted to a right-handed factory converted frame, a much cheaper alternative to the one-peice aluminium cages which are currently the only alternative to a cut and shut cage.  The kit is available in our online store HERE. 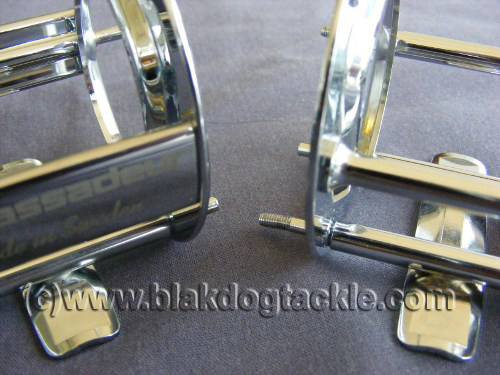 2. This simple but effective conversion is extremely easy to fit (a lot quicker and easier than fitting a CT bar and studs) and allows left-handers to utilise the very popular round and flat bar CT cages produced by ABU for their right-handed models. The kit also uses thumb screw fittings to effect the conversion so you have the added bonus of adding this popular upgrade. If you use the standard fitment (without the optional modification of the cage) the cage can even be re-used on a right-handed reel. 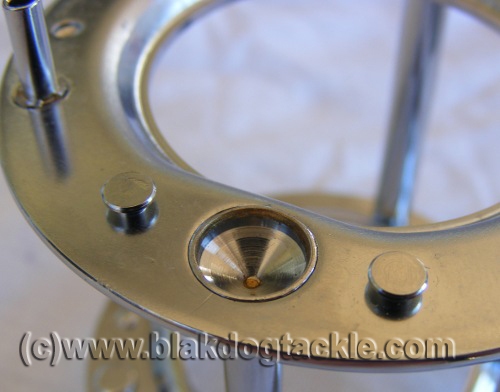 3. If you intend to use a round bar CT frame for this conversion there is one extra step involved. The round bar CT cages retain the small lugs (pictured above) which are used for the worm drive retaining plate on level wind models. These will foul the gearbox if they are left in place so need to be cut off and filed or ground flush. This will not effect the cage as the lugs are no longer needed on a CT reel but a grease coating over the ground area is advisable to prevent risk of corrosion if you intend to use the reel on the beach. 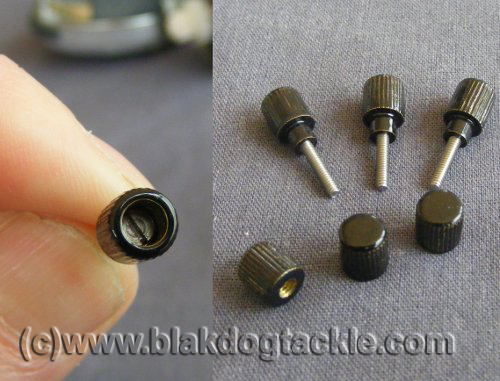 4. The kit works by changing the side plate fittings to match the right-handed frame and to do this it uses the six thumb screws included in the kit; three male (for the left-hand side of the reel) and three female (for the right side). These thumb screws are the working part of the kit and the only other part required is a stainless steel plug which is used to plug a hole in the gearbox side plate. As with our custom thumb screws those supplied for the gearbox side have a screw head to allow them to be freed up with a slot headed screwdriver if they are stuck. 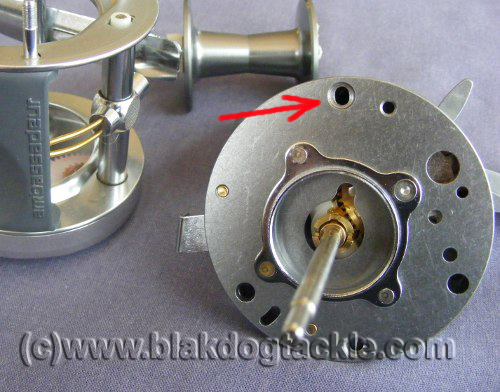 5. The first step with the conversion is to remove the components of the reel from the left-handed cage. You will need to completely strip the gearbox as the hole indicated with the red arrow will need to be opened out to 3.2mm to accomodate a cage bar end of the new cage. The right side plate and ratchet mechanism will transfer straight onto the right-handed cage without any further modifications. 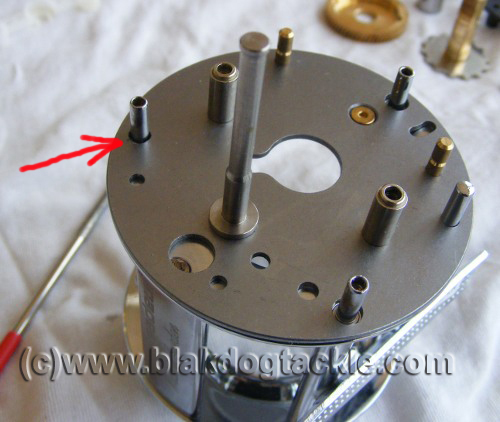 6. You can use a drill to open out the hole in the brake plate but as it is only made from light aluminium it is very easy to file with a small round file if you don't have the right size drill bit.  For those who are less confident at reel conversion the file is a safer tool to use.  With the hole opened out it now gives clearance to the bar end and as you can see from the picture the brake plate now fits cleanly on the left side of the right-handed cage. 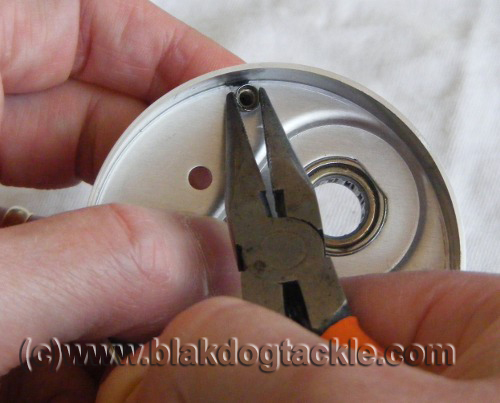 7. The next step is to remove the captive screws from the gearbox side plate. These are simple to remove by gently squashing the internal splayed cups back to their original diameter with a pair of pliers; all three screws should come out of the plate with a light tug.  If you have other reels it's worth hanging on to the old captive screws as they can be useful as spares.

8. This picture shows the gearbox side of things ready for reassembly. The brake plate from the 6501 now fits on the 6500 CT cage and the old captive screws have been removed from the side plate. The male thumb screws (pictured) will now be used to fit the gearbox to the new cage.  It's now time for the reel to go back together. 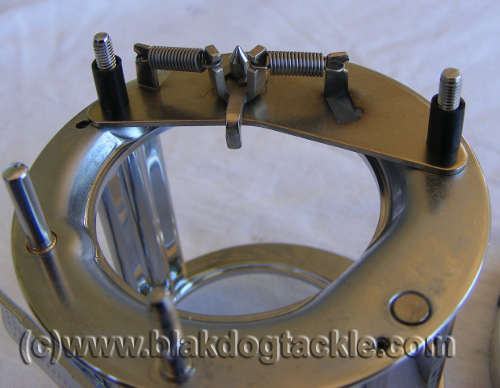 9. If the reel is being converted for tournament casting then it's likely that you will want to leave the ratchet mechanism out of the reel. If you need the ratchet then it can simply be fitted to the new cage in the usual way as shown and it will work exactly as it did on the standard cage. The only point that I have noticed is that the black bar spacers possibly need to be slightly longer to stop the mechanism rattling; a couple of nylon washers under the spacers would undoubtably fix this, though even with a rattle the ratchet on the demonstration reel worked absolutely fine. 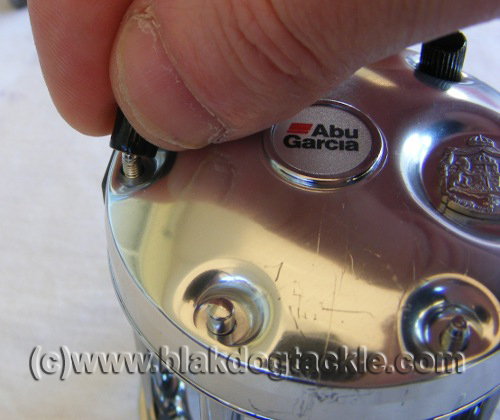 10. With the ratchet mechanism fitted, the side plate is held in place on the right side of the frame. Usually it would be retained with three screws but because we are fitting to the 'wrong side' of a 6500 cage we have male threads on the bar ends so we use the three female thumb screws supplied with the conversion kit. 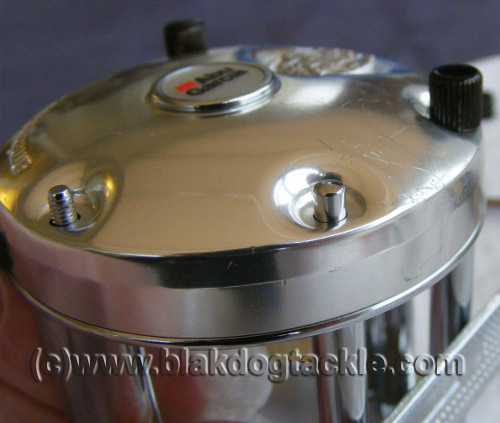 11. It's worth mentioning here that with the right side plate fitted to the cage, the unthreaded locating bar at the lower edge of the plate will protrude by about 5mm. This doesn't get in the way and won't effect how the reel performs but you may want to modify this bar by cutting it down carefully and polishing the end so it is flush with the side plate. Bear in mind that if you do modify this bar you won't be able to fit it back on a right-handed reel though I suspect that many lefty-handed users are not going to worry about this in the slightest. 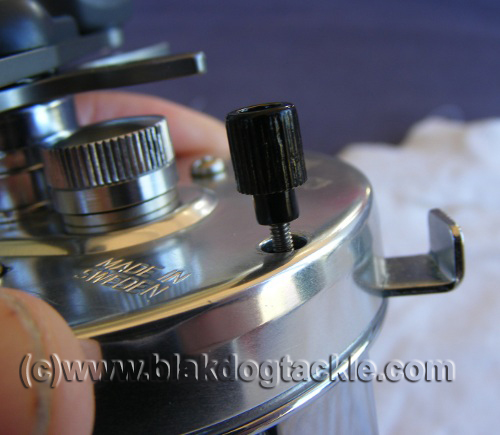 12. Assemble the gearbox of the reel as normal; the only difference is the lack of captive screws in the side plate. With everything in place simply locate the gearbox on the new cage and use the male thumb screws to fix it in place. Everything should slot together as easily as it would with a standard left-handed cage and the spool should centre as usual. If you experience any alignment issues then it is likely that one of the plates has not fitted propely so check the edges of the side plates to ensure there are no gaps indicating that a plate is not flat to the flange of the cage. 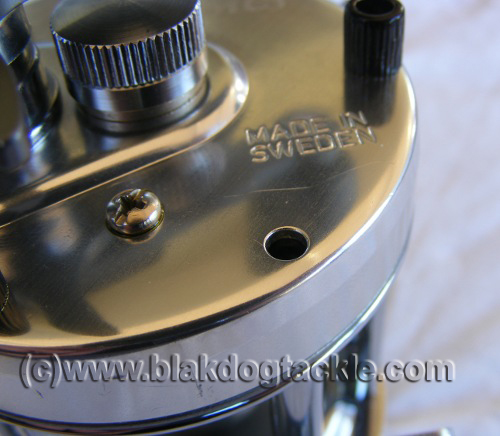 13. Once the gearbox is held in place and the reel seems to be working as it should the final job is to blank off the hole at the bottom of the gearbox side plate.  The plain bar end on this side of the 6500 cage is not long enough to block the hole in the 6501 gearbox and so we use the stainless steel plug supplied with the kit to neatly block off the hole and stop dirt and salt getting in at the gears. 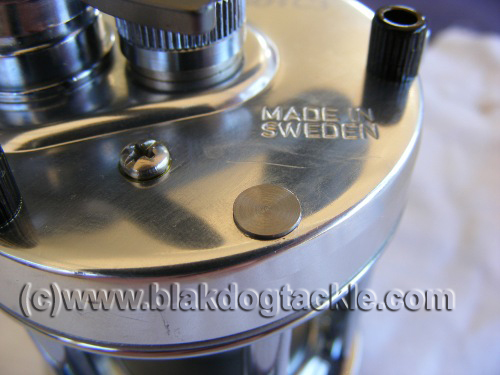 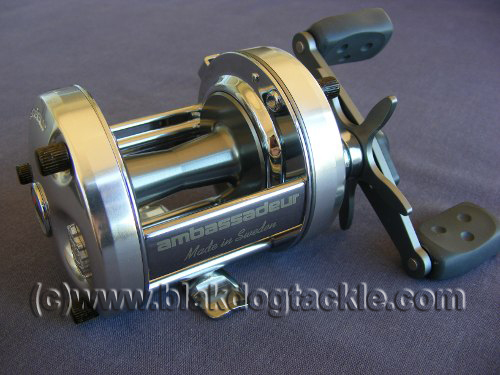 15. This final picture shows our demo Ambassadeur 6501 reel fully converted and fitted to a 6500 flat bar CT cage; the conversion took about 15 minutes to complete. We deliberately haven't covered any other modifications in this tutorial as we wanted to concentrate on demonstrating the fitting conversion but as it is the reel will already be a much better casting reel.  Further modifications to the reel would give the owner a very respectable tournament reel. Left-handed anglers and casters have very limited choices when it comes to reels and upgrades so it's high time they had the option to use a factory converted CT cage. If you have any questions about any aspect of this tutorial please email us via our Contact Us page.